I know the news is a month and a half old. I needed time to process.

Star Wars is a mild obsession for me. “A New Hope” is one of the earliest films I remember watching, I’ve seen the originals dozens and dozens of times (and the prequels several times as well), I’ve read the books, I own the Trivial Pursuit game, I tracked down the Holiday Special, and I’ve sunk more money than I care to admit into Decipher’s 1990s licensed card game. The top of one of my bookcases looks like this: 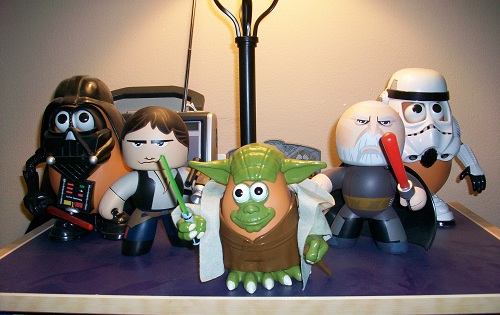 So it’s safe to say I have some investment in the franchise.

When I first heard the news that George Lucas has sold Lucasfilm to the rapidly expanding Disney empire so the House of Mouse could craft more Star Wars movies, my first reaction was one of utter horror. Tinkering with the Star Wars film canon without the direct consent of George Lucas? Oh, the humanity!

My visceral reaction had a lot to do with my view that as much as I don’t trust Lucas to make another truly good Star Wars film (the prequels range from pretty good to bad), I trust someone else to do so even less. Though fandom rightfully asserts a feeling of ownership in the material, the fact is that Star Wars, until this October, anyway, was Lucas’s sandbox. He made it, he owned it, and my gratitude to him for writing and directing one great movie and shepherding two more great movies made me more amenable to him doodling in the margins of this fantastic universe. But if anyone else starts creating movies that move forward the overarching plot, that rubs me the wrong way.

Anyway, that’s what I thought when the news first broke. As I’ve thought about it more, however, I’ve shifted into something like ambivalence, and perhaps a benign curiosity. Why rage against the machine when the machine has already unequivocally won? What if another filmmaker could actually make a good continuation of the Star Wars story? Why not just hope for the best?

Regardless of what happens next, I’ll always have my original movies, and that’s something Disney can’t take away. I still don’t see the need for more Star Wars movies, but I suppose that doesn’t matter (and it seems like Disney is actually trying to find trustworthy people to make the movies, too, so that’s nice).

However, this wouldn’t be a Matinee Culture article if I didn’t produce some stronger opinions, so here they are: Three ways to make the new Star Wars movies not suck.

I know the ship has already sailed on this one, but I had to include it. If you’re going to make a Star Wars movie that takes place after the original trilogy, I’d much rather it focus on another story entirely or perhaps take the form of a behind-the-scenes “interquel,” similar to the 1990s “Shadows of the Empire” multimedia project.

The reason for this is the same reason I stopped reading Star Wars novels: “Return of the Jedi” ends with a narrative closure, a happy ending that can only be sullied by further installments. At the end of “Jedi,” the Empire is seemingly defeated, Leia and Han are together, and the Force is at peace. Since no story can continue without conflict, all stories featuring the main characters after the events of “Jedi” by necessity must make the events of Episode VI seem less final and less satisfying.

I would prefer a movie that focused on the edges of the galaxy far, far away, not dealing with the Skywalker clan and starting something new in an old universe.

2. If you do make Episodes VII through IX, don’t cast anyone from any of the other movies (except Kenny Baker and Anthony Daniels)

This entry was going to be “don’t cast anyone from the original movies,” but recent rumors have surfaced that actors like Samuel L. Jackson and Ewan McGregor might be interested in coming back for some shoehorned-in appearance or another.

Casting the original actors is a bad idea for two reasons. The first reason is that it’s cheap. It reinforces the worst aspect of “sequel-itis”: the attempt to emptily reference something from an older movie because “hey, you liked it back then, right?” It will be hard for any appearance by one of the original actors (let alone Jackson’s deceased Mace Windu or McGregor’s deceased and de-aged Obi-Wan Kenobi) to not smack of pandering.

The other reason ties back into the idealized ending of Jedi. According to Wikipedia, in 2010, Mark Hamill looked like this: 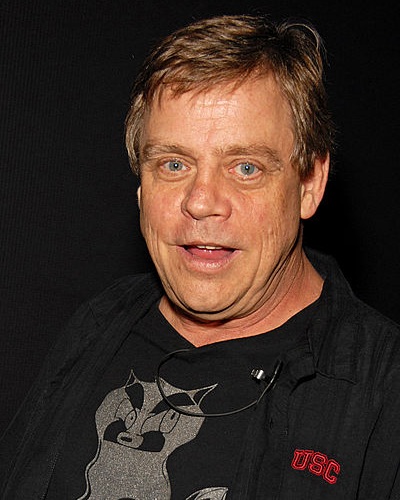 This is one Jedi we don’t need to see the return of.

I don’t mean to pile on to Hamill, but this is not how I want Luke Skywalker to look. The heroes of the original Star Wars movies were presented in ridiculously idealized forms, and while showing the truth of aging is a great thing for some movies to do, it’s not something the mythic space opera world of Star Wars was meant for.

The problem is that recasting is also a no-no, for obvious reasons. If Disney decides to keep following the Skywalker clan, it should focus on a later generation – but make sure it keeps R2-D2 and C-3PO, because it’s not a proper Star Wars movie without them.

3. If you do cast the original actors, don’t cast them in big roles

Though Star Wars definitely has its share of wizened figures (Yoda is 900 years old, for Pete’s sake), its adventuresome domain is primarily reserved for the young, the vital, the people rip-roaring for excitement. The older generation is typically made up of those who used to be going on adventures and who are now mostly content to dispense wisdom – and maybe step up if the situation calls for it.

If I had to pick a member of the original cast I would be most OK with bringing back, I’d probably say Billy Dee Williams. Already a fringe player in the original trilogy (and clearly a man who had his own stuff going on outside of the movies’ scope), Lando Calrissian is the kind of character who could play a small but meaty role as some sort of roguish older gentleman, able to provide narrative continuity without beating you over the head with his presence. I think I speak for a number of fans when I say that the last thing I want is an aging Luke Skywalker running his own Jedi temple or an elderly Harrison Ford piloting the Falcon toward the Death Star III.

So, Disney, those are my suggestions. I hope you take them, but even if you don’t, I have just one more request: please continue to make the original theatrical versions of the original trilogy available for purchase. I can forgive George Lucas for a lot of things, but his insistence that we all upgrade to his tampered-with special editions was a step too far.

One thought on “Notes on making a good Star Wars movie”